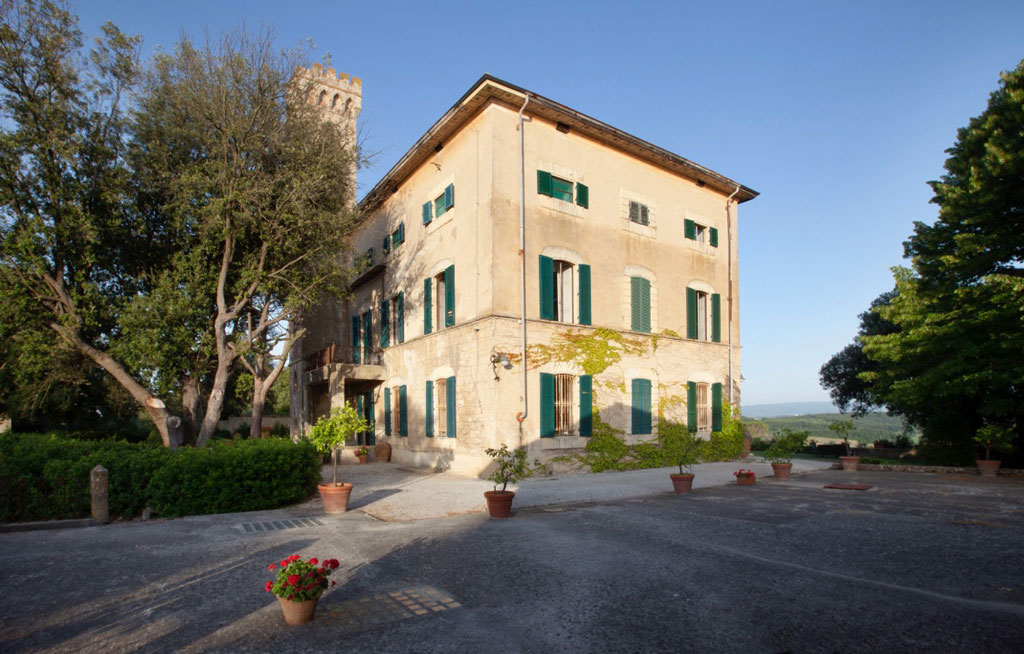 Originally a Medici hunting residence, the villa was enlarged in the late 19th century when it was bought by the ancestors of its present owners.

It sits within a 22-hectare estate, just a few kilometres from the Tuscan coast. With origins of the property dating back over 1,000 years the property stands as one of the area’s most notable buildings. In addition to the villa’s 1,230 m2 of floor area the estate also includes the ‘Fattoria’ – the farm’s previous administrative building – extensive cellars, olive groves, woodland and a swimming pool.

The architectural merit of the wonderful villa lies in the grandeur of its original façades, bell tower, and the wealth of original features.

One enters the villa into a grand hallway which forms part of the central axis of the property. Elegant steps lead into the main salone where one is immediately struck by the original Venetian marble flooring (partially restored after damage from hosting Second World War officers!) and majestic fireplace. Thanks to the French windows opening onto the gardens, this room is luminous and airy. The rooms either side of the salone, boast frescoed ceilings; the library, billiards room, dining room and kitchen. The ground floor is serviced by two WCs.

To the first floor the layout again centres around the salone with original frescos and bedrooms either side. A total of four bedrooms and two bathrooms are found on this floor.

To the second floor one finds extensive attic rooms (six bedrooms in total) which serve for guest and children’s bedrooms and service accommodation. Two bathrooms are shared by these bedrooms and there is also a laundry room to this floor.

The villa is currently used as a summer residence of a noble Italian family. The conditions are therefore liveable, but the current facilities and layout offer the new owner the possibility to modernise.

Alongside the main villa, connected by an underground walkway with 3 large storage rooms, one finds the original ‘Fattoria’ building, consisting of two storeys, underground storage/cellars and three apartments. Total floor area for this additional building is approx. 1,590 m2. This includes 3 guest apartments.

The gardens surrounding the villa include terraces and lawns with views of the surrounding Tuscan hills, secular ilex and oak trees, laurel hedges and shrubberies. Beyond the gardens are 21 hectares of land which is primarily laid to olive groves and woodland allowing a high level of privacy and the possibility to produce one’s own olive oil annually.

Full details of this spectacular property are available on request.